Home > Page > The Carter Center
Waging Peace. Fighting Disease. Building Hope.
The Carter Center, in partnership with Emory University, is guided by a fundamental commitment to human rights and the alleviation of human suffering. It seeks to prevent and resolve conflicts, enhance freedom and democracy, and improve health.

To find out more about The Carter Center or to get involved click here.

On June 9, 2005, I had the great pleasure to meet and visit with President Jimmy Carter at The Carter Center in Atlanta, GA.

A year earlier, as I prepared to write a book about making ladder back chairs, I wrote a letter to Mr. Carter requesting an interview to discuss his ladder back chair making techniques. Over the years, I had seen several magazine articles about his furniture and chair making work and I wanted to include his work in my book. He agreed to the interview and in July 2004 we spoke on the telephone.

When Mr. Carter answered the phone, he asked how I was doing. I answered that I was a little nervous speaking with someone that I held in such high esteem. He responded with “You would not be nervous if we were in the wood shop would you?” From that moment I felt like we were old friends discussing a mutual passion (this is true). Later, Mr. Carter agreed to write the Foreword to my book.

We discussed all aspects of chair making as well as the tools used to make the chairs. Mr. Carter mentioned that he had two or three spoke shaves which he used to shave the chair parts. I then described how I had modified the traditional style of wooden spoke shave to be more comfortable and more efficient. I asked Mr. Carter if he would like to have one of my spoke shaves.  He said that he would appreciate getting one. I then decided that I wanted to make a rocking chair for him and I asked if he would prefer walnut or cherry wood. He thought for a moment and stated, “I would prefer cherry.” I made the spoke shave of cocobolo, a Central American rose wood, and then used it to make the rocking chair. As I was building the chair, my wife, Carol suggested that I also do something nice for Mrs. Carter. I made a five-box set of oval Shaker boxes for her. I truly appreciate Carol’s suggestions and again, she was right!

I delivered the Carter chair to Atlanta, GA on my annual trip to Berea, Kentucky. This annual trip is to harvest green (freshly cut) wood and hickory bark (used to weave the chair seat) for my chair making students.

Mr. Carter certainly seemed pleased with the chair and Shaker boxes that I had made for him and Mrs. Carter. He made it all worthwhile for me when he stated, “This is going to be my personal chair and I’m taking it to my home in Plains, GA.

I sincerely appreciate Mr. Carter’s support and encouragement in my chair making work.

February 20, 2013
Carol and I were delighted to have the Carters come visit us this morning. President Carter is an excellent woodworker so it was very exciting for me to demonstrate how I make chairs, clocks, Shaker boxes and spoke shaves. It was so special to have each of them make a couple of Shaker boxes as well.
Previous
Next

Every year, beginning in 2006,  Filbeck builds and donates replica rocking chairs and shaker boxes to the annual Carter Center fundraising auction. His chairs have sold at auction for as much as $100,000.

In 2015, Russ Filbeck and President Jimmy Carter collaborated with Steve Cross and Trenton Tye to construct a Dining Set, using traditional woodworking and blacksmithing techniques. President and Mrs. Carter’s names are carved in the two armchairs. Carter worked with Filbeck to shave the rungs and front legs and steam bend the back legs and slats. The completed set raised $600,000 for The Carter Center at their 2016 annual fundraising auction. 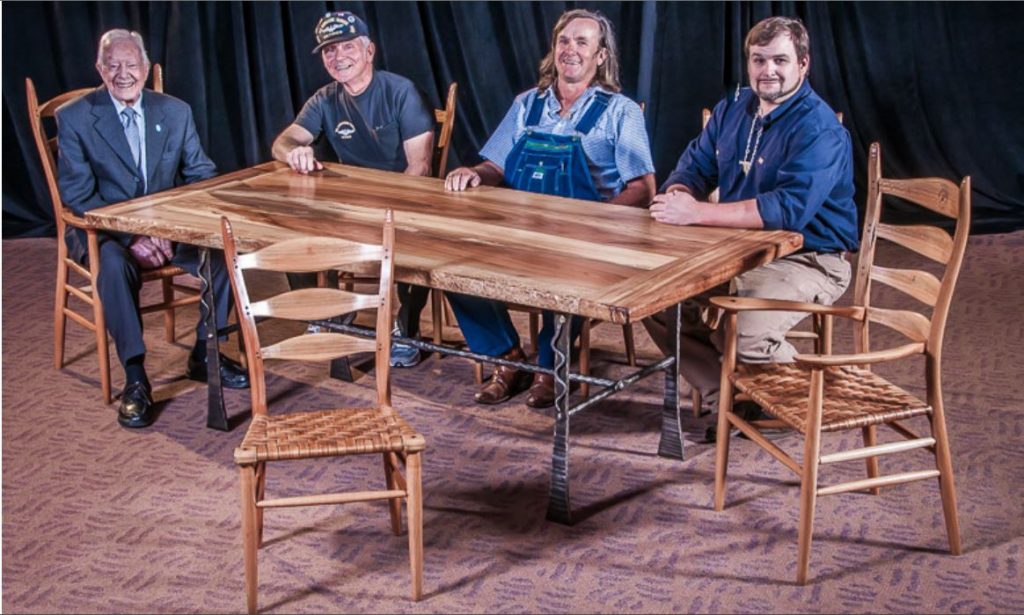 A sculpture commemorating the friendship between President Jimmy Carter and Russ Filbeck…
Features two bronzed hands pulling a draw-knife shaping a chair leg held on a small model of Filbeck’s shaving horse. Filbeck enlisted the help of his friend Dick Erickson to make the initial molds of the hands and then perform the lengthy process of making the bronze sculptures. Over the next several months while Ericksom completed the bronze work, Filbeck made three model shaving horses. The cast left hand belongs to Russ Filbeck and the right hand belongs to President Jimmy Carter. Three copies of the Teamwork sculpture were made: one each for the two friends. The third sculpture, featuring both of Jimmy Carter’s hands, was sold at auction for $140,000 to support the efforts of The Carter Center.
By Kim